From supercars to well worn-bangers; Britain is in LOVE with its motors. In 2016, the British public added another 2.69 million new cars to the road which is a growth rate of 2% year on year. Consequently an immense total of over 38 million cars are now on Britain’s streets, with the love for a sweet ride differing in all aspects of size and function. Varying from functional hatchbacks to full-size 4x4s and even hybrid electrics – Britain has a brand or model for every personality.

But which car brand has won the hearts of the British public? Which car model are Britons in love with? And what colour do they want their new ride coated in? To find out, we’ve data-mined through every registered car in the DVLA database to uncover the secrets of Britain’s car habit. 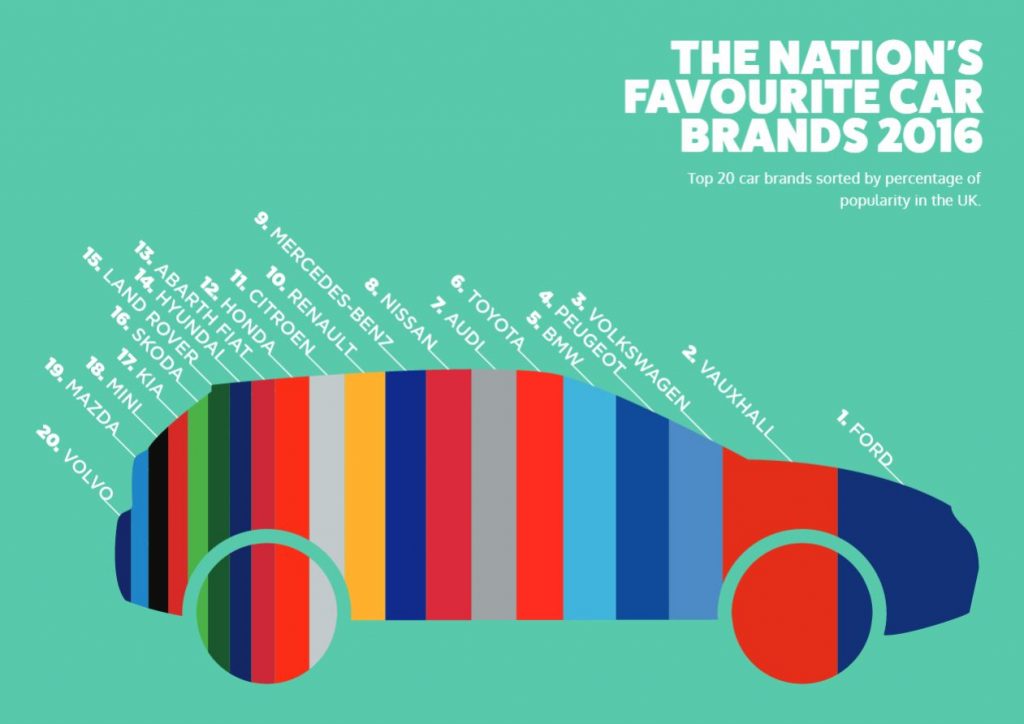 Although their market share has been decreasing over the last few years (see below), the American giant Ford are the dominant car brand in the UK. With over 4 million cars on Britain’s roads, the only real competitor is Vauxhall which has nearly a million fewer cars on the road. The most ‘expensive’ brand to feature in the top 20 was Mercedes which impressively finished 9th in the results while the two other high end brands, BMW and Audi, performed fairly well finishing 5th and 7th respectively.

While little has changed over the past three years, there are some obvious winners and losers. Audi has made an impressive jump from 9th most popular in the UK to 7th, while Kia, a brand that started 19th in the analysis in 2013 managed to sell over a 100,000 cars in three years, improving its ranking to be 16th most popular. 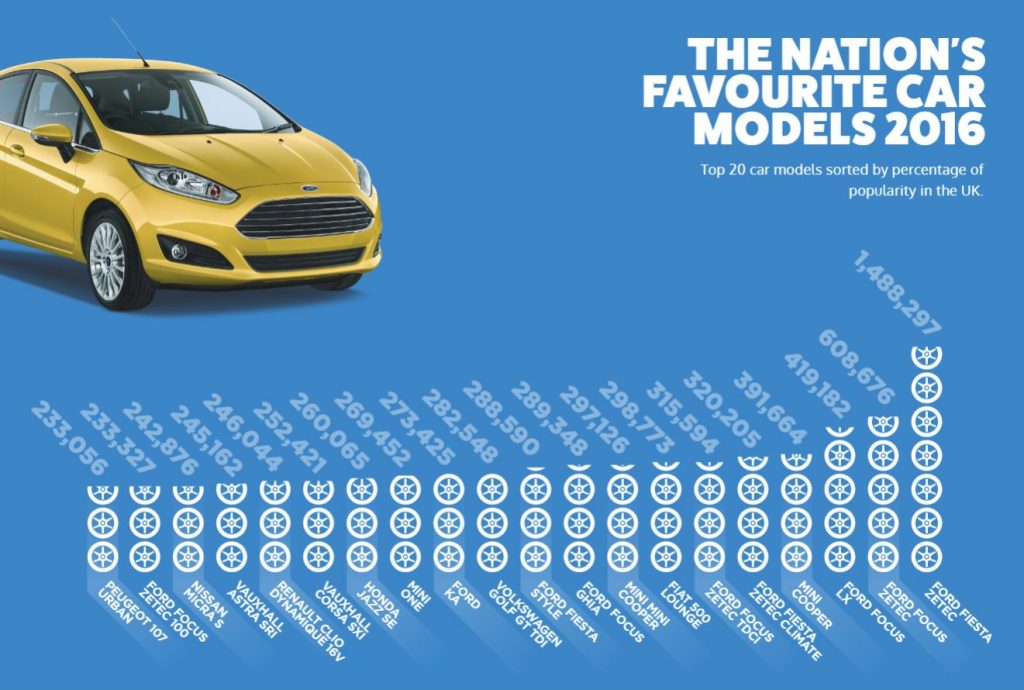 Next, we took a close look at Britain’s favourite car models. Analysing over 38 million registered car models in the UK, it was the Ford Fiesta Zetec which came out on top in 2016. In fact the Ford brand managed to take the top three places in our Model analysis, with the Mini Cooper managing to be the only non-Ford model to break into the top six. Other popular models include the Fiat 500, the Volkswagen Golf and the Renault Clio.

The data we received enabled us to also examine the colours registered against cars in the UK from 2006 through to 2015. Below you will see two graphics. One displaying the change from 2011 to 2016 and the other showing the change in colour preference from 2006 through to 2011. Analysing 31 million cars across the UK, Silver/Aluminium was the favourite colour in 2011 with a staggering 7.3 million painted this colour. Over a million behind, blue and black are the UK’s second most popular car colour with just over 6 million cars coated this colour. Interestingly, white has surged in popularity in the last 10 years while the demand for a red car has dropped off extensively. Meanwhile, multi-coloured cars still seem to be a popular choice, with just under 8000 cars opting for a tacky tinge. Make use of the interactive charts below to analyse the data further. 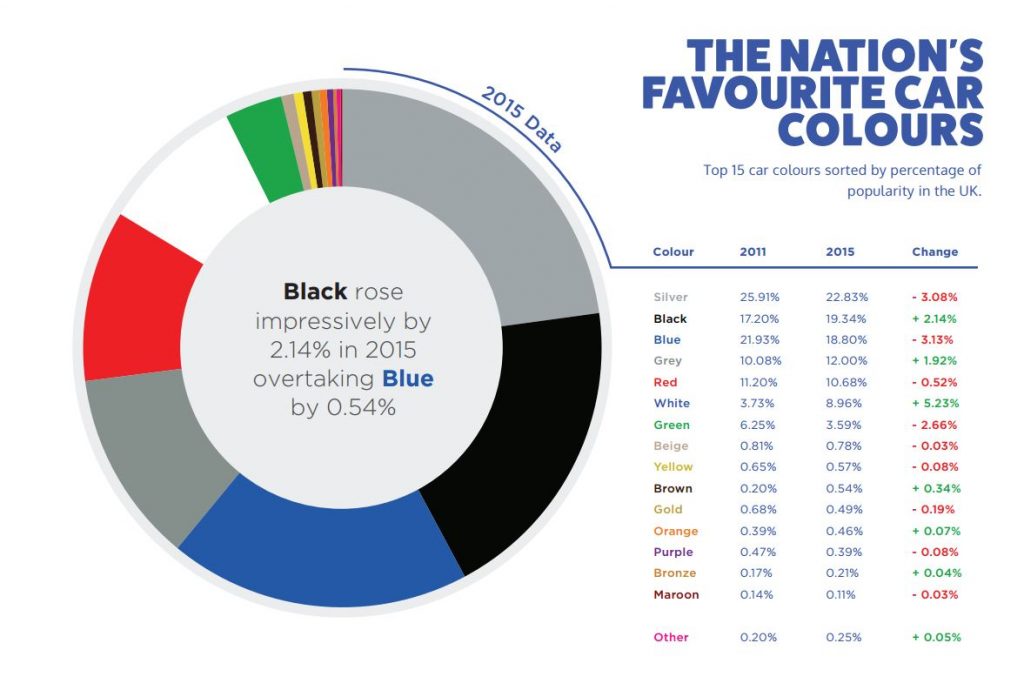 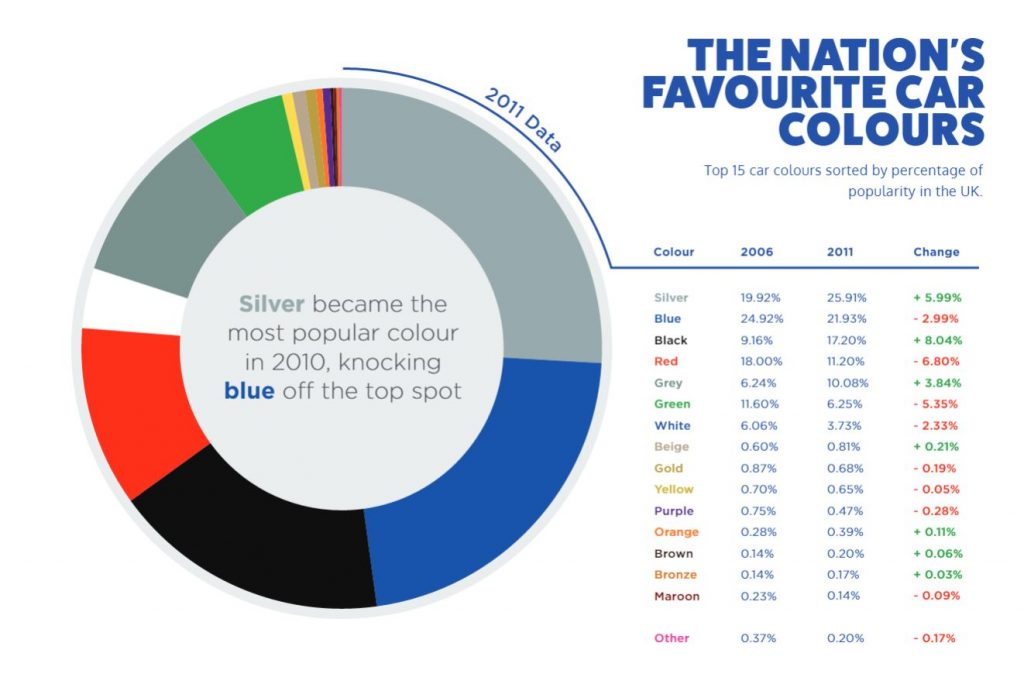 While the chosen colours have largely remained the same, the biggest trends seem to be the decline in people choosing blue cars which correlates with the rise in silver car popularity. The other notable trend is the significant drop in love for a green coloured car. Within the space of 5 years there is over a million fewer green cars on the UK market.